I think I just proved they will let anyone who pays into these contests. The following two photos were entered into National Geographic photo contest.  The first one was selected and published on their website. (National Geographic has taken down the site.)


I am a amateur photographer, though I understand old school photography.  I began shooting film around 1968 as a child using my parents camera.  I wish I new enough back then to keep the negatives.  I took a lot of photos of experimental aircraft at the EAA convention.  I bought my own 35mm SLR in 1971, which was a Sears / Ricoh TLS.  I loved that fully manual camera with the built in TTL meter.

The one thing I do not do today with my digital photographs is to alter them in programs like Photoshop.  To me the digital age allows you to get away with shooting anything, and correcting it later.  The above photos were not altered.  This is how they turned out, shooting against the sun, using the camera settings to get me there.  If you have been around developing, you will understand the aches and pains at times of enlarging, dodging, filtering.  You really need to understand the makeup of photography to get what you want.  Film gets you there.  Digital does not necessarily do that.

Currently I own a Mamiya 645S, Cannon EOS 650, and my first ever camera bought with my own money, the Sears / Ricoh TLS.  The digital camera I use is a Cannon EOS Rebel XS.  The photos above were taken with the XS.

Through a divorce we gave up another Mamiya 645S (brand new), an Omega 45D, a Nikon F2 that was bought in trade for a worn out Cannon AE1.  We also gave up my families old bellows 120 camera.  The photographer in the family was the wife. Unfortunately as things turned out, she is no longer doing her photography and I have been just plugging along.

As I find new things around NW Indiana, and revisit the old, I will be shooting with the XS for ease of uploading to this blog.  I sort of feel I am getting lazy, not using my film cameras.  But the point in life is to have fun, and right now the XS is fun.

Click on this line for my copyright.
Posted by Wesley Bushby at 11:28 PM No comments:

Lou Shields at The Horseshoe - Chicago

The Horseshoe is a small community bar in Chicago.  Lou Shields was opening there, so I went for a quick hop into Chicago to listen to him.... 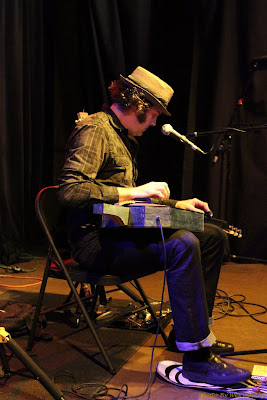