Another nice opening for this month, featuring Rock 'n Roll at Studio 659.  Many of the pieces there took me back to a place where I had a lot of fun.  Here are some photos . . . 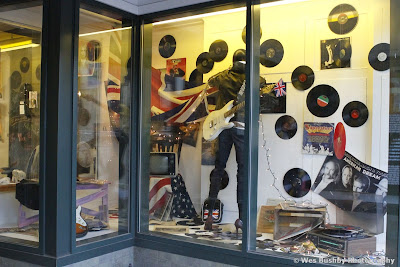 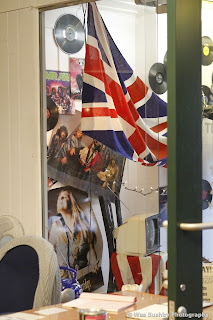 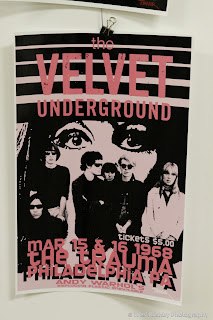 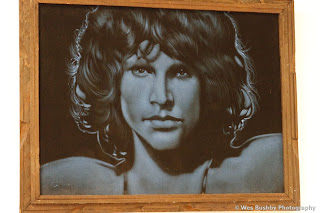 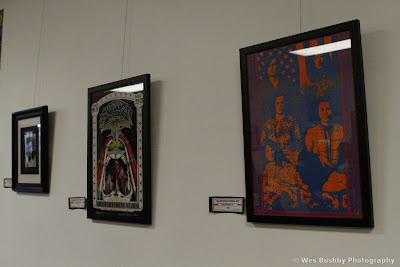 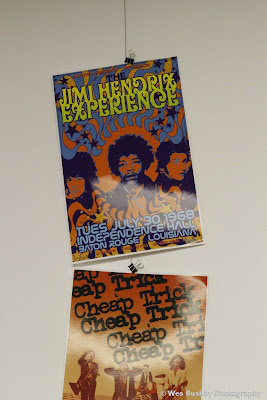 Although this next photo was Hotel Chelsea, it also looks like my dorm room during college. For those who may not know the hotel's importance, or at least importance to me, it was where musicians, artists, writers, thinkers, those wanting a vibe, came to stay. The hotel is in New York. The list of people who have stayed there is large, and included Mark Twain, O. Henry, Janis Joplin, Bob Dylan, Jimmy Henrix, Alice Cooper, and from what I understand became the filming of Andy Warhol's Chelsea Girls (1966).

Though I cannot speak about the hotel's time in Rock 'n Roll, I can speak to my life during that time, and I saw my life in front of me at this opening of Rock 'n Roll at Studio 659. 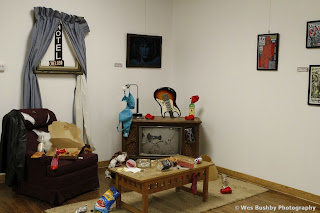 Though this is Adrian on the floor all snookered up, it was also me and my friends on a Tuesday night during college, with the exception of perhaps a few more ladies undergarments. Man I enjoyed that time growing up. I would do it again, without question . . . free spirit, free love, being open to just what is in front of you . . . and the occasional confrontation with "the man" . . . 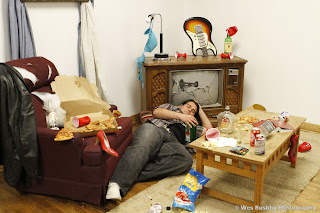 Here is a photo of Adrian behind his T-shirt creation. I really liked the image on the chalk board (the photo that follows). 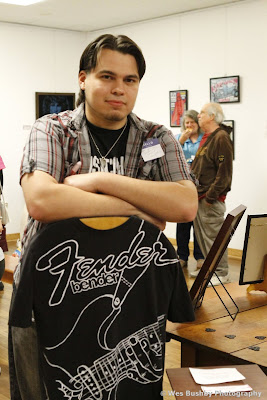 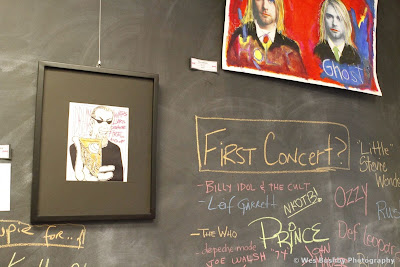 My favorite almost toothless biker dude showed up in garb, and all the ladies were clinging to him . . . what a man . . . 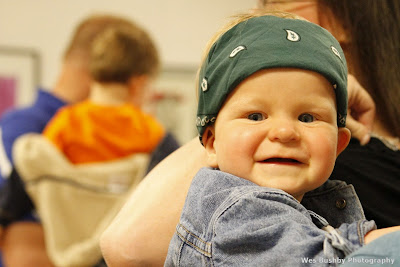 Now, this next piece wheeled back some memories, black and white photographs being hung out to dry in the dark room. At least that is my interpretation. Would have been very real for me if wood clothes pins were used to hang the photos.

You need to remember that during the '60's, there was Vietnam and protests. A lot of underground movements were around writing, photographing, rallying, to end the war and the rulership of the current political and social oppression of free speech, and protesting the cultural norms that were then a suppression rather than the acceptance of a growing society of Hippies (which I am a part of). Status quo was not being accepted by young adults. The stereotyping or molding of "what you should be" was being thrown out the door. Sort of where my photography is coming from, not wanting to learn and copy others, but rather to experience and create from "me" . . . 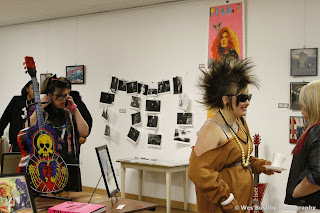 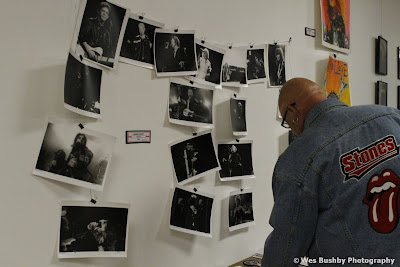 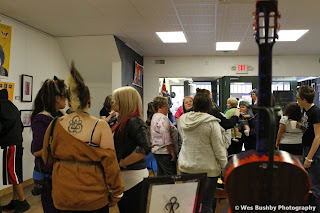 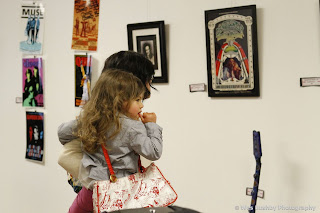 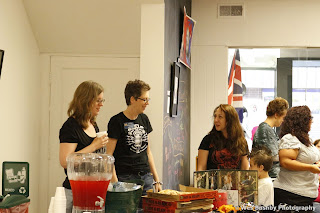 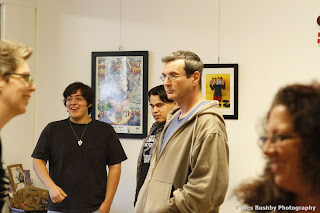 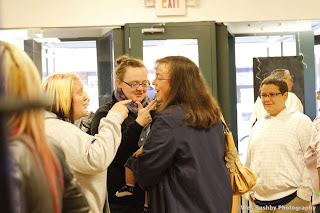 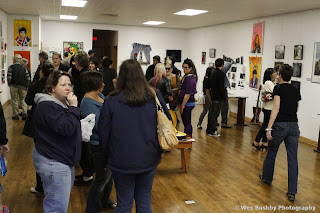 Although I do not have a good photo of the art Joey is looking at (left), the image reminded me a lot of Alex Kingston who played in "ER" and recently in "Doctor Who". 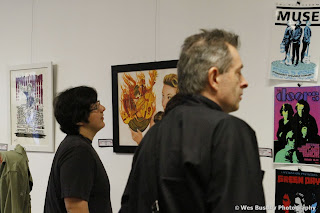 Future photographer . . . starting at the right place I suspect . . . 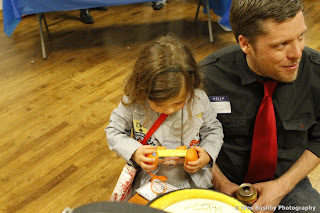 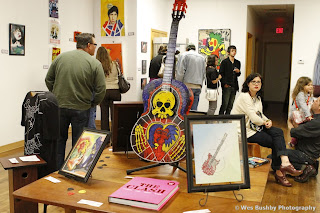 This Rock 'n Roll showing represents a time in my life. One that was very musical, free spirited, satisfying, and a time in my life I am proud to have had. I feel now that I should have dressed the part this evening, though those clothes would never fit me now. So, instead I will provide you with a couple photos of a flashback during my adult college time at Purdue Calumet, during a '60's homecoming theme.  I think this is the same year I received the award from the Purdue Alumni Association for outstanding student . . . 2001. 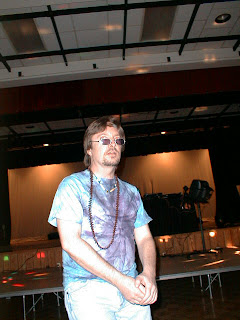 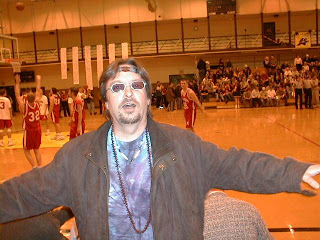 Please go see this show. Sit, stare, go mindless, feel the time of joy in our history, and bring it to our new future!  It is galleries and studios like this that bring joy to people's lives.  Please donate when you can, to keep this culture of art that brings meaning to us, alive . . .

I think this is one of my favorite posts of yours so far.

nice blog/post about the show Wes. I walked past the studio this weekend... wasn't opened, but the windows were cool.

It was a bit strange, in that I had a good time, and a lot of things on my mind. I had to leave after an hour to go shoot my buds, and on the way felt a little sad leaving the studio. It wasn't until I got home that I had the strong need to write this up. It fell into the "passion" mode of my life. Basically the photography of my life. So I needed to write this. Glad the piece came out well, or I would have let myself down . . . 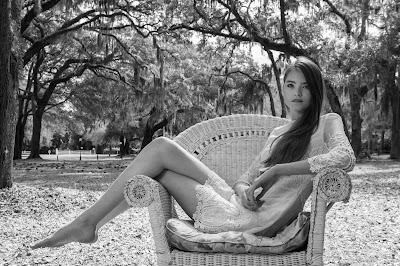